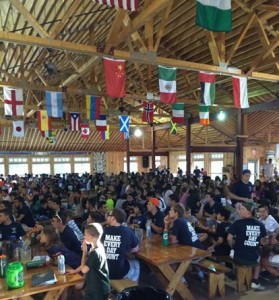 As I drove into The Realm today, the sun was cutting just perfectly through the trees.  I quieted my radio so I could sing the Robin Hood alma mater, and could hear the sound of children playing as I made my way down the dirt road.  I was home.

Soon after I arrived, buses began to appear at the gas pumps.  Groups holding signs to denote their spot sprinkled the air, and campers navigated their way through the sea of green and white Robin Hood shirts to greet their summer families.

In no time, groups made their way down to the waterfront for a general swim, others were on the homerun diamond trying to “hit the trees” (a RH rite of passage), and a pack of girls – ranging in age from Scribes to Tumblers – were playing pony on the quad.

Dick formally welcomed everyone at dinner with two cherished traditions:  the oldest and youngest campers of both the girls and boys camps tore down sheets of paper illustrating the number of hours it has been since we were all last together; and, he toasted “to our returning campers, welcome home!  To our new campers, welcome to the greatest place on earth.”

After spending 11 summers at Robin Hood as one of the directors, I am now considered a Robin Hood veteran.  When I dated DC in the 90’s and came to camp as a visitor for Family Camp (formerly called “9th Week”), who would have ever thought that I would sit here now as an authentic Robin Hooder?  This past January I retired as a director, but as any alum will attest, you may come for a summer, but undeniably stay for a lifetime.

Now I have the privilege of spending a few weekends of the summer in this magical place.  Today, I hugged the returning children (many of whom are now taller than me), and I welcomed our new campers to Robin Hood.  Tomorrow I play, swim and probably lead an afternoon abs class 🙂

New parents – I imagine you may be missing your children and wondering if they are okay?  Did you do the right thing by sending them to camp?  It was a significant choice you made in sending your child to Robin Hood.  Let me assure you, you didn’t just choose any camp; you chose a place that sees children return year after year.  Our children come from as close as Maine and as far as Switzerland.  They grow up with each other; they are one another’s life forces throughout the year.  Yes, the air smells like pine, the sunsets take away your breath, but the friendships formed are like none other.  And it is those relationships that are the secret sauce of this place we call “The Realm.”

With that said, sleep well as we wish you all …

As opening day quickly approaches we wanted to fill you in on what has been going on in the Realm!

All of our staff have officially arrived and we are so impressed with their work ethic and dedication to Robin Hood. Returning Robin Hood staff have been teaching our new staff the history and philosophy of the Robin Hood way and getting them ready to experience the Realm in full swing.

For the past week staff have been working endlessly to get camp ready for the kids to arrive. The fields have all been lined, the baseball field has been raked, and the volleyball courts improved. Today was spent down at the waterfront. All the docks have been put in the water, another ski dock was added so our campers can ski all day long, and the staff swam their 16 laps!

Last week, camp got together to celebrate Chuck Illig’s 70th birthday and 49th summer at Robin Hood. Chuck is the epitome of camp, we couldn’t ask for a better leader. He continues to inspire our staff including both David and I who are proud to say that we worked for him in the 1980’s and now work beside him. He walks around camp with the same enthusiasm as he did then and we are so grateful for everything he does for Robin Hood. Dick Roberts will be joining us for his 32nd year at the Realm. Dick is the head of Boys Camp and spends the summer supporting and encouraging campers and staff alike.

We also wanted to reintroduce some of our newest members of the administration team. Molli Warsh is returning to Robin Hood for her fourth summer. She will oversee our kitchen as well as communicate with parents over the summer as well as in the off-season. Molli has three cousins at camp and her brother worked at camp for many years. Whitney Kreiter is joining us for her first summer at Robin Hood and we are so proud of everything she has done. Whitney recently graduated with a degree in Social Work and has an extensive camp background – she worked at a wonderful camp in the Midwest as an assistant director. Whitney works closely with Jody Podl on programming and all camp activities. Our third addition to the administration team is Katie Solomon. Katie just graduated from Cornell and this will be her third summer at camp. Katie is helping to oversee all group leaders.

We are looking forward to keeping in touch with you over the summer and sharing our fun. Be sure to follow us on Facebook, Instagram and Twitter and login to your CampInTouch account daily to read our WoodChuck Newsletter and view the day’s photos. We are so excited and ready for the campers to arrive. As we enter our eleventh summer we couldn’t be more proud of our facility, record number of campers, and the amazing staff that keep Robin Hood running.

See you all soon,