So many great things happening here at CRH today. With 6 groups out on excursions – those of us left behind had the run of the place.  We spent most of the day on the waterfront. It was hot but a cool mountain wind kept us protected at the beach. Every group has 2 chances at water skiing and enjoyed sailing and stand up paddle boarding. This afternoon the whole camp was at the beach- both senior and junior. I love watching kids in the water- enjoying the music in the back round while playing ball with our staff .

Its amazing to me how fast the summer has gone by…. The groups are like families with everyone working together while awaiting the upcoming Green and White competition.  The GW buildup is exciting to watch. Everyone is talking about the break- this is bad news for us. Its the last piece left in puzzle of  summer of 2016. We have had a great beach day, RH gives back day,  and visiting day.  Our kids always remember the break and it defines the summer for most- editors note – we are all set and hope it will be a hit.  It is a mix of old and new -some times the great ones are usually my biggest fear while the biggest flops are my most confident ones.

We had a alumni visit today from Chuck Illig’s second summer at camp. Chuck was his counselor and they really enjoyed catching up. He spoke to camp and then took some questions from the campers. Most of the interest was about how much the Realm has changed and of course his favorite GW break. After 50 years he retold the story of his best break. He ended the talk with a piece of advice – enjoy every moment at camp and never stop coming back .  He said the memories from 50 summers still fill his mind every day .

Sweet dreams from the Realm

Beautiful morning with lots of going on – this is the start of excursions for us!

After a breakfast in the dining hall of pancakes and bacon – fruit bar and cereal line both hot and cold, the following groups loaded into vans and took off for parts of New Hampshire and Maine.

Friars and Bards out for four days coming back Thursday night – headed to Western Mass and the Basketball Hall of Fame. Then the bards took off on their own to Hampton Beach (along New Hampshire’s sea coast). Both groups will be camping out tonight and cooking dinner.

The Arrows and Lancers were next to leave with the girls heading to Canobie Amusement and Water Park. The boys were off to an afternoon of paintball!! Both groups are camping and cooking out but in separate camp grounds, both three day excursions.

The Saxons and Scribes took off for Rock Harbor Beach on the Cape for an afternoon of sun and surf. They will be spending three days on the Cape and staying in separate hotels, not camping out. They will also be eating out at local restaurants on the Cape.

Now back in camp for those of us left, with only half the camp, have had lots of activities to choose from. It was a hot day and water front activities were in popular demand by all, from water ski area to canoe and kayak – sailing areas and swimming in between. Top side A&C, woodshop, tennis, riflery and archery led the choices.

These were all divided up between Archers, Bows, Squires, Jesters, Tumblers, TPJs, Foresters, Shires, Yeomen and Quills. These excursions leave later in the week. Some going out Thursday and some Friday.

The Foresters and some Lancers had an afternoon soccer game with Camp Toko and some groups watched the game and cheered them on.

All meals today we ate and drank lots of water!!!

We’ll keep you up to date on excursions and what is going on at camp!

We’re eagerly awaiting your arrival tomorrow evening! The Chuck Illig Playhouse will be alive with song and dance, as our campers have been rehearsing all week. We look forward to seeing you after 6:45.

Today was the second day of Robin Hood Gives Back here at the Realm. Last night was so amazing and impactful for all of us. In our 13 years at the helm of Robin Hood,  I have never been so proud of our kids. I say “our” kids with respect–after almost four weeks, we do seem like a family, and DC and I feel like we have 428 more kids to be proud of and brag about.  Sixty percent of our staff has grown up before our eyes here at CRH. We have watched them work their way through the Realm as junior and senior campers.  They now lead us every day and are truly the reason this place works so well.

Back to last night -– the dining hall was silent as Sgt. Dan spoke for over 25 minutes. Our kids listened and hung on his every word. They broke into a long applause and cried when he finished.  I asked every camper this morning to give back: since it’s Wednesday, the day we usually write letters home to you guys, I asked the kids to each write a letter to one of our troops now serving overseas. As I told them last night – every time we see a soldier in uniform we should shake their hands and thank them for their service. I asked them to put that in writing in a personal letter.  Dan promised to deliver the letters to the right hands and off we went.

I’ve included some samples of the letters.  They are nicely written with respect and love.

We can’t wait to see you Friday.  Our campers are so excited to show off their new home and friends.  I promise you that “our” kids have grown up in many ways in the last four weeks. I can’t wait to hear the reports from you guys, and again thanks for sharing your kids with us. 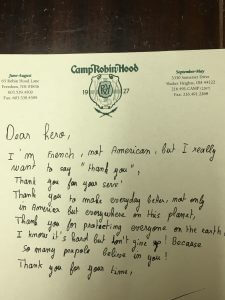 Today was a great day in The Realm. We had our Yeomen travel to West End to compete in soccer, softball, basketball, and newcomb. Our 13 and under girls soccer team journeyed to Evergreen for a tournament and made it to the semifinal round. They played well and had a great day!
Meanwhile back at camp, we had a mostly sunny day with the exception of an in and out summer shower. Our campers enjoyed boat rides to the marina, archery, tennis, drama, and biking with our own DC. It was a bustling and pleasant day in The Realm.

Everyone’s looking forward to one last week of regular activities before the excitement of excursions and Green and White kicks in!

Sweet dreams from The Realm,